The Current State of Emergency Psychological Assistance in the Education System

Crisis situations in which the life and health of significant numbers others is threatened, media coverage of tragic events is susceptible, others are emotionally destabilized, children are forced to change their living conditions, significant social contacts are severed, etc. are a particular danger to the psychological state of those involved. [3; 5; 10].

The system of emergency psychological assistance (hereinafter EPA) in the educational environment is a system of measures to provide psychological assistance, depending on the type of crisis event in which the participants of educational relations have found themselves, whether in a situation of explicit or implicit threat to their life and health [2].

In order to study the current state of emergency psychological assistance in the education system of the Russian Federation, a monitoring study was conducted in January 2022 by the Moscow State University of Psychology and Education.

1. Assessment of the infrastructure for providing emergency and crisis psychological assistance to students and their parents (legal representatives).

2. Gathering information on staffing for emergency and crisis psychological assistance in the education system.

3. Identification of conditions that negatively affect the quality and availability of emergency and crisis psychological assistance for students and their parents (legal representatives).

4. Identification of areas in the education system that require the development of psychological services with regard to the provision of emergency and crisis psychological assistance to students and their parents (legal representatives).

The information-gathering technology used for the monitoring included a survey of three groups of respondents:

Specific questionnaires were developed for each group of respondents.

In most of the regions monitored, permanent anti-crisis units have been set up to provide EPA to participants in educational relations in emergency and crisis situations (fig. 1).

There are permanent anti-crisis units in all regions of the Urals Federal District.

There are no such facilities in most of the administrative divisions of the Far Eastern and North-Western districts. This was confirmed by representatives of 6 regions out of 8 in the Far Eastern Federal District.

In regions where there are no permanent anti-crisis units, their functions are performed by:

— the crisis center at a psychiatric hospital (Tula region);

The total number of anti-crisis specialists varies from 3 to 118 people (Fig. 2). The number exceeds 100 people (116 and 118 specialists, respectively) in only two regions of the Volga Federal District (Samara Region and the Udmurt Republic). Anti-crisis units are represented by several organizations in these regions.

According to the monitoring data, the most common option is for an anti-crisis unit to be represented by a structural unit within one organization (fig. 3.)

The respondents were asked to list the procedure for actions at the level of the EA, which carries out public administration in the field of education, to provide EPA to participants of educational relations in crisis and emergency situations.

According to the monitoring data, a well-developed algorithm of actions to provide EPA, including organizational, coordination, methodological and resource-allocation functions, exists in the majority of administrative divisions of the Russian Federation (fig. 4.). Among the subjects with permanent anti-crisis units, the share of those with a fully developed algorithm for the provision of EPA is higher.

Regions with no crisis events in the last 5 years are more likely to have no permanent anti-crisis units for EPA than regions with more than 10 such events (fig. 6).

In emergencies/crisis situations, staff from PPMSs are involved in the provision of EPA.

It was asked to assess whether the professionals at the PPMSs provided assistance in each of the 5 types of events in 2021.

Two armed attacks were recorded in educational institutions, and EPA for the students, their parents (legal representatives) and teaching staff was provided by specialists from the PPMS-centers of Moscovsky district of St. Petersburg and the Rostok Center for Psychological and Pedagogical Rehabilitation and Correction (Kazan).

In situations of violence against students, EPA was provided at 72 organizations (17% of the total number of PPMS-centers).

In conflict situations among students, parents (legal representatives), or pedagogical staff, EPA was provided at 200 organizations (47% of the total number of PPMSs). According to respondents’ estimates, in 2021, specialists had to work with 2—3 such cases (15%), or some, less often, with 4—5 cases (10%).

When providing EPA, various difficulties may arise at the regional level, at the level of the organization, or that of a specific specialist (fig. 7).

All respondents cited a lack of specialist staff as a major challenge in the provision of EPA.

For the heads of EAs responsible for state administration of education, the second most important difficulty is related to the territorial remoteness of educational organizations. Heads of PPMC-centers and psychologists note an insufficient level of material and technical support for psychological services (37% and 36% respectively).

Heads and specialists of PPMS-centers are concerned about low salaries (34% and 35%); for the majority of Eas, this is not a factor significantly complicating the provision of EPA for the participants of educational relations (19%).

The monitoring participants assessed to what extent the proposed criteria reflect the quality of emergency psychological assistance on a 10-point scale.

All participants gave a high score to the criterion of “increasing the level of accessibility of psychological assistance for participants in the educational process who find themselves in crisis and emergency situations”. The EAs assessed this at 8.85 points. (fig. 8).

The heads of organizations providing psychological assistance to the population assessed it at a level of 8.38 points.

Specialists providing psychological assistance to children and their parents (legal representatives) assessed this criterion as high as possible (7.59 points). The highest scores were given by specialists from the North-Western (7.8 points), Ural and Central (7.7 points each) federal districts. The lowest score for this criterion was given in the North Caucasus Federal District, which generally correlates with the scores from the EAs.

Second place was given to the criterion “raising awareness of participants in the educational process about the possibilities of seeking appropriate assistance in crisis and emergency situations”. Four regions gave a high score to the criterion “raising public awareness about the services provided by psychological centers in crisis and emergency situations” (above 9.0 points): the Siberian, Far Eastern, Northwestern and Ural Federal Districts, while in the North Caucasus Federal District, the EAs assessed this criterion only at 7 points.

The criterion “reduction of the intensity of acute stress reactions in victims, optimization of their current mental state” was assessed ambiguously by the participants. Heads at all levels put this criterion in the third place, but experts placed it only in 5th place.

The criterion “functioning of a permanent anti-crisis unit (in the education system) in each constituent entity of the Russian Federation” was ranked at 4th place by heads of all levels, while specialists ranked it in the 3rd place.

Not all subjects of the Russian Federation have permanent anti-crisis units within the education system. There are those who can speak with certainty about the impact of the existence of such units on the quality of EPA provision, and those who can only assume it would be so. The scores obtained for this criterion also show differences depending on region.

Specialists providing psychological assistance ranked the criterion reflecting the quality of EPA provision 4th, with average scores ranging from 7.1 to 6.6 depending on the region, indicating a consistency of scores.

For EAs, the criterion “dynamics of referrals to free anonymous services” reflects the quality of the provision of EPA at an average level of 7.6.

The criterion reflecting “a decrease in the number of minors with deviant and delinquent behavior in comparison with the previous period in the region” placed last.

Fig. 1. Availability of permanent anti-crisis units in subjects of the Russian Federation

Fig. 2. Distribution of anti-crisis units by the number of full-time specialists

Fig. 4. Bar charts showing the presence in the administrative divisions of the Russian Federation of a well-developed algorithm for providing emergency psychological assistance 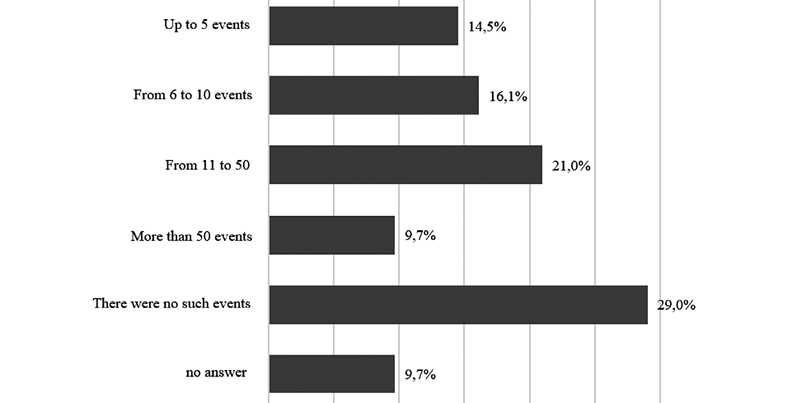 Fig. 5. Number of events in the last 5 years that required psychological emergency assistance

Fig. 6. Distribution of regions by availability of permanent anti-crisis units according to the number of events in the last 5 years that require the provision of EPA 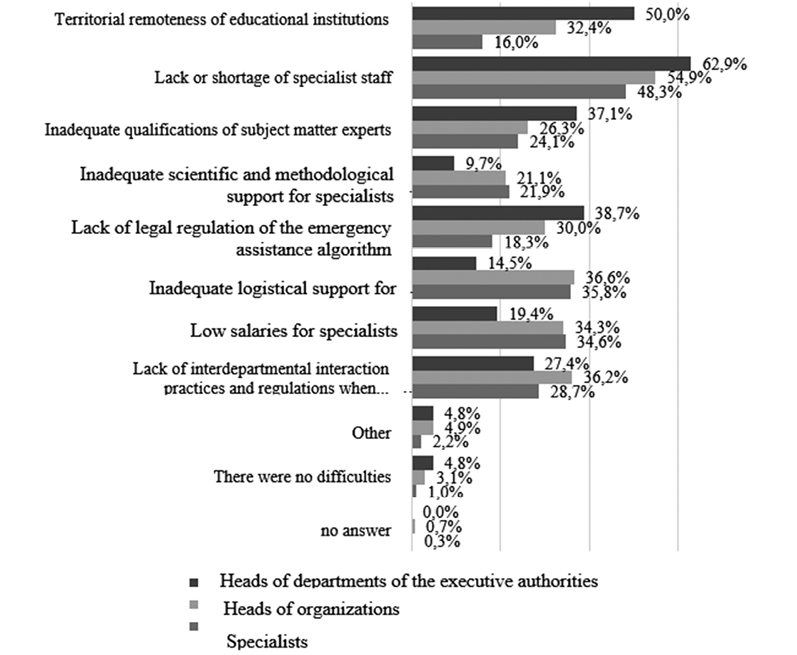 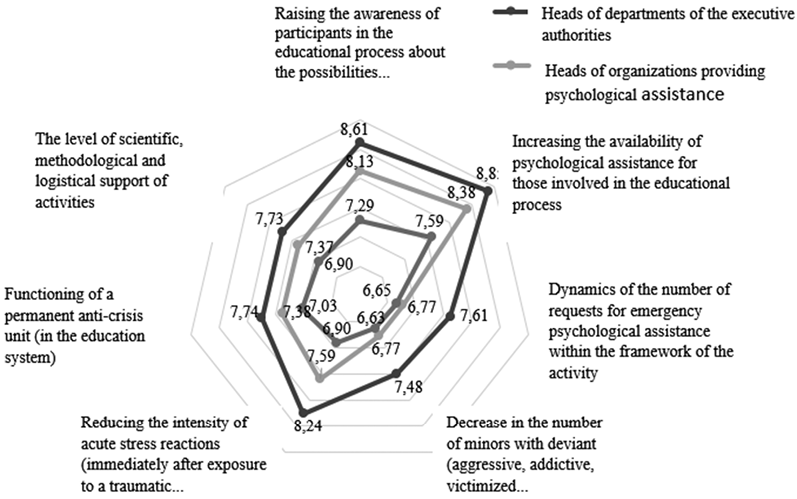 Four criteria define the quality of the provision of EPA:

— Increasing the availability of psychological assistance to education participants in crisis and emergency situations;

— increasing awareness among participants in the educational process of the possibilities for seeking appropriate assistance in crisis and emergency situations;

— reduction of the intensity of acute stress reactions (immediately after exposure to the psychologically traumatic event) in victims, normalization of their current psychological state;

— functioning of a permanent anti-crisis unit (in the education system) in each administrative division of the Russian Federation.

Experience and analysis of successful practices [8; 11] show that the effectiveness of EPA work largely depends on the availability of qualified specialists [1]. In the education system, there is a need not only to increase the number of trained specialists providing EPA, but also to conduct large-scale educational work with teachers of educational organizations to develop knowledge and skills in the early detection of crisis situations and the provision of first psychological assistance to those participants of the educational process in need [6; 7].

Information About the Authors

Olga A. Ulyanina, Doctor of Psychology, associate Professor, Head of the Federal Resource Center for Psychological Service in the Education System, Russian Academy of Education, Chief Researcher of the Research Center, Academy of Management of the Ministry of Internal Affairs of Russia, Moscow, Russia, ORCID: https://orcid.org/0000-0001-9300-4825, e-mail: lelia34@mail.ru

Larisa A. Gayazova, PhD in Psychology, Deputy Head of the Federal Coordination Center for the Provision of Psychological Services in the Education System of the Russian Federation, Moscow State University of Psychology & Education, Moscow, Russia, ORCID: https://orcid.org/0000-0003-0542-6687, e-mail: gayazovala@mgppu.ru

Psychological safety of students in interaction with virtual reality